Bill Frisell’s career as a guitarist and composer has spanned more than 40 years and many celebrated recordings, whose catalog has been cited by "Downbeat" as "the best recorded output of the decade." Recognized as one of America’s 21 most vital and productive performing artists, Bill was named an inaugural Doris Duke Artist in 2012. He is also a recipient of grants from United States Artists and Meet the Composer, among others. In 2016, he was a beneficiary of the first FreshGrass Composition commission to preserve and support innovative grassroots music. For that composition he created the Harmony ensemble, featuring Petra Haden on vocals, Hank Roberts on cello, and Luke Bergman on baritone guitar. 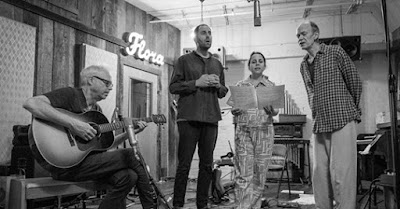 First Baptist Church of Denver is a Christlike congregation that serves with compassion, celebrates diversity and empowers personal faith.
Posted by Rethink Baptist at 10:26 AM